Obviously a bobsleigh run was present on Tom his bucket list. After all, who wouldn’t want to experience the feeling of chasing down an ice track with high speed? An internet search showed that you can join a real profressional bobsleigh run in Olympia World in Innsbruck.

Just outside Innsbruck you have this Olympic area where you can rush down a real bobsleigh ice track in a professional bobsleigh. The official bobsleigh is populated by four people. There is the steerman and the braker and also 2 guests where Marie-Claire and myself could take place. For safety reasons and because a running start is very difficult, there is a seated departure.

Around 30 minutes before our run we could explore the track together with a former bobsleigh athlete. The lady explained us about the ice track, the curves and shared a lot of other intersting information. 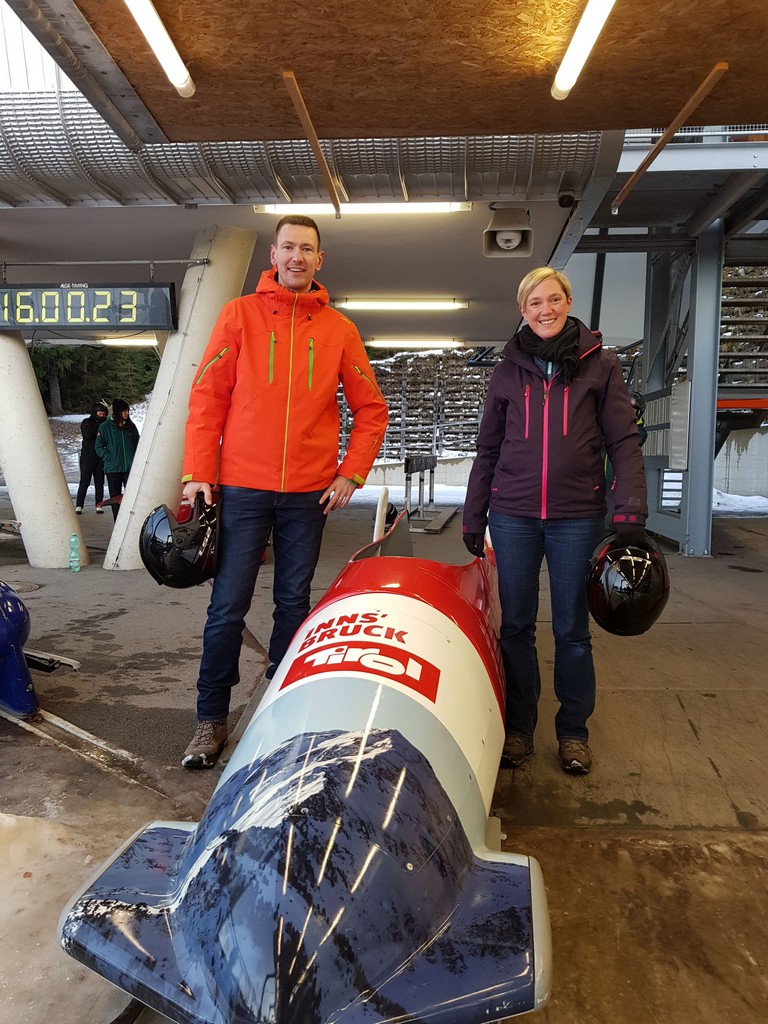 After squeezing in the sleigh, I can hardly image we would have been successful in getting in the sleigh while running. It is very narrow and it was a bit of puzzling to get in. Once succeeded, the guide pushed us on the track.

The first couple of turns are easy and you have plenty of time to look around and to see how you are going down the ice track. However, while speed is being built up, after the 360 degree ‘Kreisel’ turn it became very hard to look around. Speed kept going up and near the end we reached a top speed of 119km/h. Close to the finish you have the triple turn combination where your head first bangs left, then right and then left again. At this moment it’s no longer a comfortable run and to be honest, I was a bit relieved when we crossed the finish line and our bobsleigh started to reduce speed.

The end of the track is in a tunnel below the slopes nowadays. A couple of years ago they had to make the track longer as the material keeps changing and the sleigh reach higher speeds and need longer time to stop.

Before and after our run we were able to look at a few other races. We saw some skeleton races and also the Canadian ladies team was practicing with their 2 seated bobsleighs. So even if you don’t want to step in a bobsleigh yourself, it’s worth to visit this place. You can easily walk next to the track and explore the turns and at many places you have big sreens where you can follow how the atlethes come down.

Fatbike in the snow