During a short break in Norway while chasing Northern Lights, we were able to enjoy several winter activities. Some were sportive and some were pure adrenaline kicks. Below you can find all important information and tips and tricks to do Dog sledding, Snowshoeing, Snowmobiling and Cross country.

Dog sledding is what it’s says. With a sledge behind the dogs. The Huski’s really  enjoy the low temperatures and running. When you make them stop, they show you their eagerness to continue. If you dare to release the brake for a moment, they will get your sledge going again. The sledge has 2 type of breaks, a soft one to slown them down and a hard one to make them stop en keep them stopped.

The dogs sometimes do 4 runs on a day. They are gathered in an area where they get food and have a place to rest. The dogs are so friendly, cute and you just want to cuddle or pet them. Most of them could use a bath 😉

They can very fast and when you are in the sledge it can get bumpy at moments. They reach speeds up to 30 km/h. While following the track you have to bend to the left or the rights to keep the sledge into balance. A very important thing is to help them when it’s up hill. The person standing on the sledge then has to help by pushing with 1 leg or even pushing while running. If the dogs find out that you are laze and let them do the work, the slow down and stop running. They are smart animals. But if you help them, they make it a cool run and will go as fast as they can.

In the city center of Tromso we hired some snowshoes at Tromso Outdoor. Renting snowshoes for 24 hours costs around 24 €. This is including poles. From there we took a taxi to the Fjellheisen cable car. A taxi ride will cost you around 20 €. We decided to walk up the hill with our snow shoes. For the hikers a return cable car ticket is 52 €. Yes, things are expensive in Norway. The hike up is quite steep but with the snow shoes you won’t have trouble. A good condition might be welcome.

When going uphill you can activate a placeholder under your feet which makes it easier to walk uphill. Make sure to put it back down when going downhill. We went of the beaten track and walked in fresh snow, where these shoes are made off. Certainly going down the hill in fresh snow was very cool. You can go relatively fast and still have plenty of grip.

However, when you would follow our Strava track, be aware that we drifted a bit too much to the right when going down. We came on a steep side and walking there was not trivial and if you do follow it, please be extra carefull.

The shop opens only at 10:00 and as you might keep the shoes for 24 hours, it is a good idea to pick them up the evening before at 17:00. Like this you can leave in the morning when you want. We lost a bit of time as we still had to fetch them in the morning after breakfast.

In Camp Tamok we did snowmobiling in the evening. We got an extra thick overall, boots and gloves and were soon ready to take off. You accelerate with your thumb and you only have 1 break. You need to get used to how much pressure you need to give to accelerate. Riding a snowmobile is a bit like riding a quad. You need to lean at the opposite side when the track is not flat. We were able to reach speeds between 30 and 40 km/h. I’m super proud on Marie-Claire that also rode the snowmobile for half of the time. A real power woman! 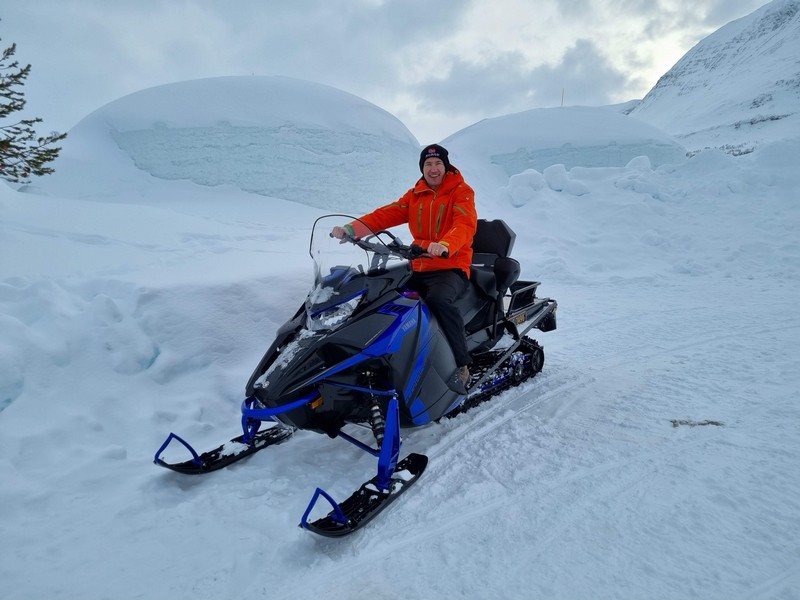 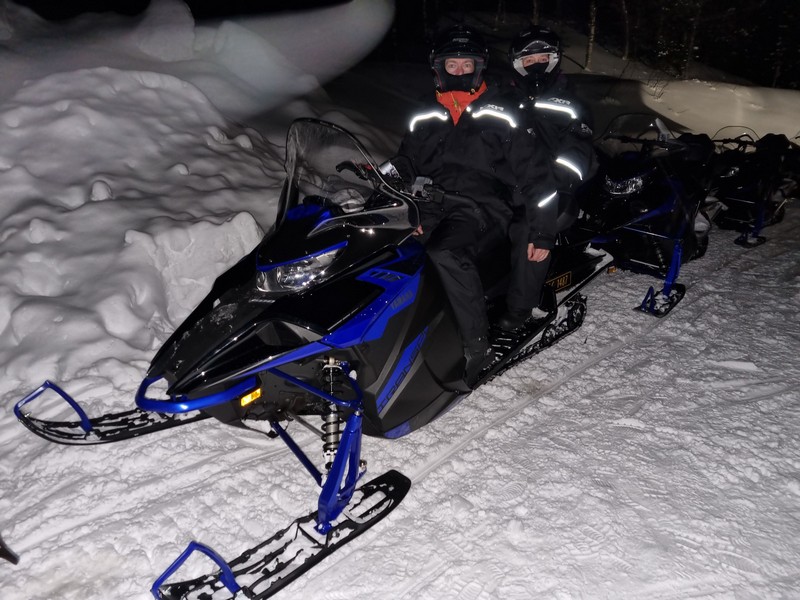 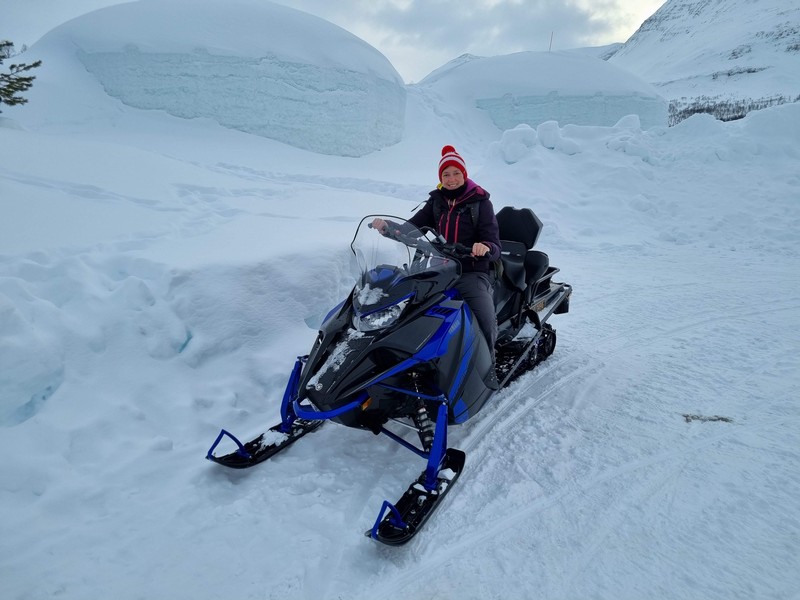 Some say that you can’t visit Norway or Lapland without doing some cross country. We rented again our gear at Tromso Outdoor. A full equipment costs around 34 € for 24 hours. We learnt from our snowshoeing adventure and rented our gear the evening before. The weather was nice and the shop has a lot of rentals, so it might be wise to make a reservation upfront.

The weather was great, the slopes were freshly groomed, and off we went. Between the official slopes (for beginners) there are also tracks for more advanced people. We tried some of them, but without the guidance track it’s difficult. We left those tracks quickly 😉

Cross country or Nordic skiing should not be compared with Alpine ski. It’s something completely different and it’s a real sport. Skiing is rather gliding down a mountain, but cross country is quite intensive. Marie-Claire and our friends, all runners, enjoyed it, but myself I leave it in the middle. I’ll go for regular skiing upon a next opportunity.

In the middle of the track there was some small cabine, a kind of small cantina where we were offered coffee and warm cinamon rolls. We tried to figure out if we had to pay or give some gift but the people assured us it was for free. They only talked Norwegian so it was hard to communicate. This was such a nice and welcome experience. We were there alone as we were quite early. When passing by later in the afternoon while returning back to the start, we saw plenty of people. Some of them had made fires and were preparing some food. Looked like a local hot spot.

Videos of our winter activities

A weekend away in Champagne