Walk for the Cure - Hike for charity

A 3-days walk event to support charity. It was the second time we linked a trip to charity (Previous charity event). This time Marie-Claire selected Walk for the Cure and got a free subscription through Think Pink. For this advantage Marie-Claire agreed to raise 300€ funds which goes directly to the research of cancer. Thanks to some great friends & familiy Marie-Claire raised more than 700 euro. Myself, I selected a regular subscription and paid 135 euro to Sports Events.

The event was organised by Sport Events. We can be short about the organisation: perfect! From the moment the subscription was done, we got the right information at the right moment.

The bib number could be collected on Thursday evening or on Friday morning; We decided to collect everything on Friday morning, when we had to go anyway to La Bresse, for the start of the first etappe, When arrived at the start we were welcomed by a friendly team that provided us our number with chip, GPS tracking device for live tracking and a t-shirt. The same friendly team was also present on the stops with food during the walks. The served us pancakes, oranges, banana, rice pudding, wine gums, different kind of cookies, cola, water, isotonic drink. As you read we had everything we needed. On the first day we even got sandwiches with ham or cheese which were very welcome after all the sweet stuff.

It was a 30 minute drive from our accomodation to the start in La Bresse. It was not crowded and we got immediate our start package with number, t-shirt, and GPS – tracker for live tracking during our 3 day walking adventure. Few minutes later we were already called to gather for the official start at 08:00. There were around 45 people crazy enough to do the long distance, which meant 100 km over 3 days with 5000 altitude meters.

At the start we noticed that not everyone was here to walk, but there we also a couple of trail runners who would run most of the course. They immediate took off and we didn’t see them back 🙂

The track we had do conquer was about 36 km and was a technical one which made we would not progress too fast. In the end it took us around 8 hours moving time. 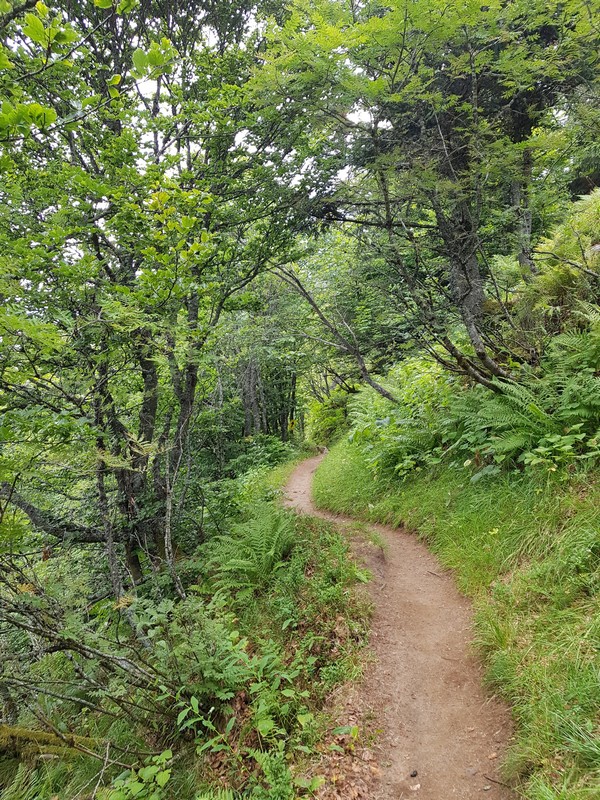 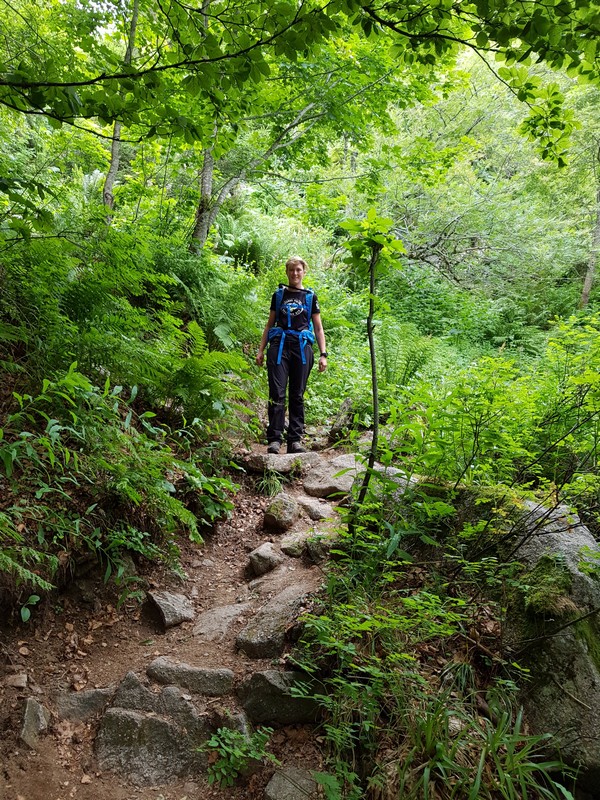 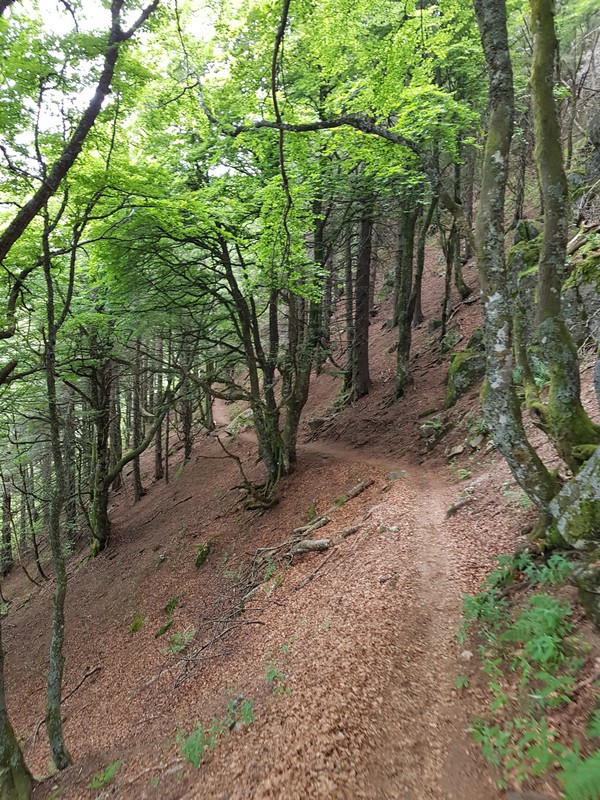 The first day was a loop with different views and environments ranging from meadows to forests. Especially the parts in the woods were very nice to walk as we crossed many single tracks. We had 2 supply stops but mainly the second one was very welcome. It came later than expected as we thought it would have been at the lake, but it was at on the top after a heavy climb which made it mentally hard, as we were counting on the stop. When we arrived there, we were glad to see sandwhiches with ham or cheese. They tasted so good. From there we had still a climb to do, some flat, and then back down to the start in La Bresse. The last few kilometers were very heavy as my knees started to hurt. But with the motivation of Marie-Claire we made it till the finish. Just a little worried about my knees. We were glad to reach the finish and were pleased to hear the organisation told the first day was the heaviest one 🙂

The start of the Walk du Gran Ballon in front of Hotel Wolf was 15 minutes later than the marthan runners. Sharp at 07:15 we took off for the longest walk Tom ever did. A full marathon distance was to be conquered. Marie-Claire walked several years ago already twice 100 km (!) during the Dodentocht and Mega-Sloebertocht.

We started off with a relatively easy part and that was good to warm up. Our muscels and feet were doing well. A couple of people, of which few were only walking this day took off quite fast according to us. The group quicly spread out and the two of us continued our journey together. The first day we only walked but noticed that most people were gently running downhill. Just before we had the biggest steep downhill of the day, we tried that on a small part downhill. It felt easier and it was a relief to use some other muscles. So when we came to the very steep downhill, we gently run down as well. Which was not always easy with our heavy hiking shoes. Most people were wearing trail running shoes and Marie-Claire felt really sorry hers were at home. I did not have a choice, I only have the walking shoes. The downhill was long and steep. Later we heard that few runner felt here going down.

After a little more than 20 kilometers we reached the city of Saint-Amarin where we had supply before heading to the first climb of the day. There was a kind of gathering and we saw that quite some people started to suffer. Also Marie-Claire started to suffer from her blisters.As there was an ambulance at the rest stop, she decided to get them taken care off, but there was not much they could do.

After filling up our water and eating something we continued our journey, as it all still had to start. A little later we left the small town and went into the woods and at once it started with a very steep climb. As we climbed quickly we started to catch up with some fast starters rapidly. Although we didn’t practise up front, we were happy to have our basic condition to keep on walking.

After the last descent of the day and another supply stop, we were ready to start for approximatly 10 km non stop climbing. It was steep and felt endless with moments, but nature was beautiful and doing such a heavy challenge with the two of use motivated us to go to the top. We didn’t see anybody coming back from behind us, and we overtook a few people. We clearly had the right strategy to not go too fast in the beginning but keep a steady tempo for the 8 hours.

On the top there was a supply stop with rice pudding which tasted heavenly. Also the pancakes and some wine gums were very much appreciated. It had been a heavy day with over 8 hours of walking. Our feet were happy we crossed the finish line and the shuttle bus was waiting to bring us back to the start. Sport Events had things organised very well. We were luckily dropped off close to our car and we were so happy to take off our shoes and head back to our gïte.

After an awesome shower we rode down to Saint-Amarin to eat a pizza in Marinella. For such a rather small town, the pizzeria was quite popular and busy. Service was friendly and fast, but a little strange. You could eat in the restaurant, but you had to take your own drinks out of the fridge. We ate and fatigue rapidly hit us. We went back to Geishouse and hit bed quite early 🙂

The last day started at 08:00 in front of  Auberge Steinlebach. As the parking was limited at the auberge, we had to park at the main road, which made we had to descent 1 km to reach the start. As other people also did not take this into account, and were a bit late, the start was delayed with 10 minutes, like this we could have a group start with

As usual the runners took off from the start and we didn’t see them back. Today everbody had the same distance and starting hour, so it was more busier at the start than previous days; After a small climb we had a long descent. The first part was not in the woods, but on lands around which made we experienced again a new landscape with beautiful views. After a short climb the final steep descent was to be done. From there we had about 8 kilometer to climb and the first few kilometers were very steep. A little before the top we had a supply stop. We stopped briefly and moved on, we still had several kilometers to go. It was a bit up and down and around kilometer 20 we started to suffer. It’s the feeling that you get close, but are not yet there and still have to walk a small hour. But the motivation kept us going, well, that, and the fact we had no choice 🙂 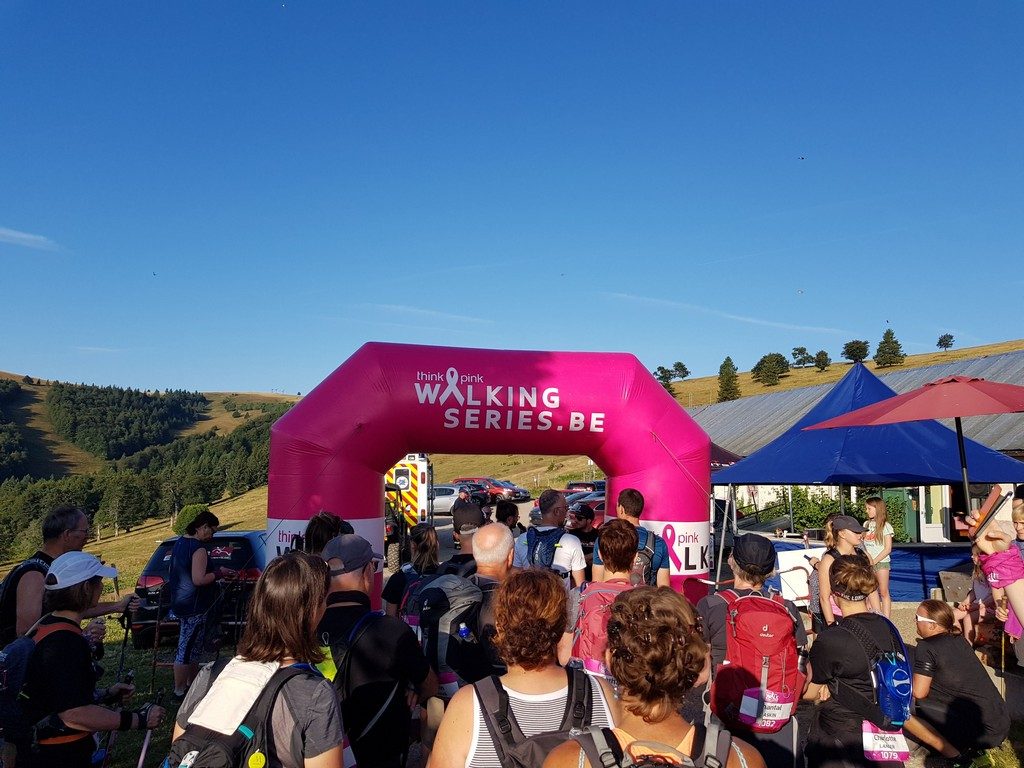 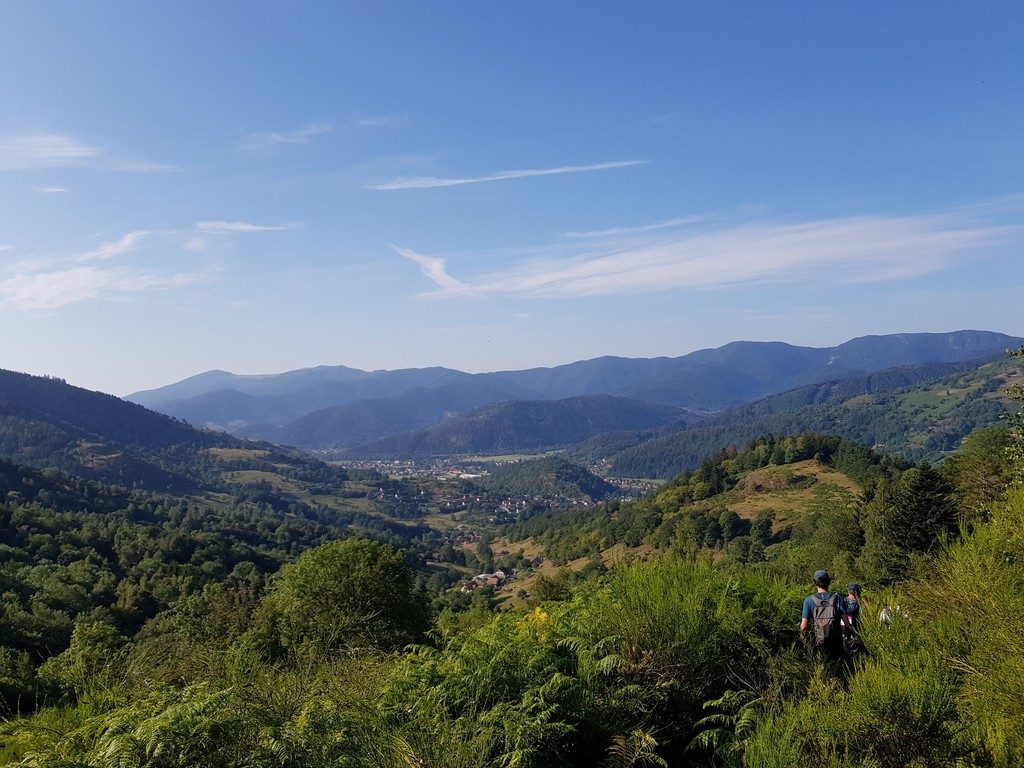 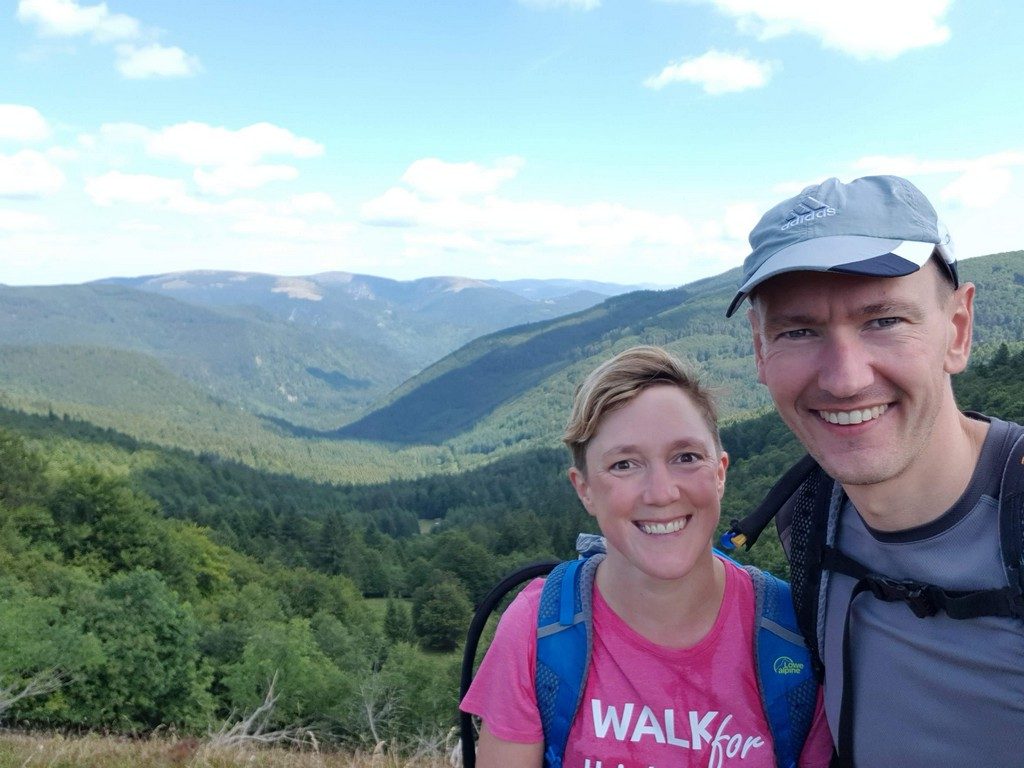 At the finish there was a pasta party and the foot was more than welcome. There was some music and a drink would have been welcome, but we decided to leave immediate after the food, before our muscels became stiff and we also had a 600 km drive to get back home.

What a great feeling to cross the finish line. We walked the 100 km in 21 hours and 18 minutes. The last 5 kilometers were the heaviest as mentally you know you are there, but still some time to go. Our feet started to hurt but you forget all about that once you cross the finish line and that the raised money will be used for research on cancer. 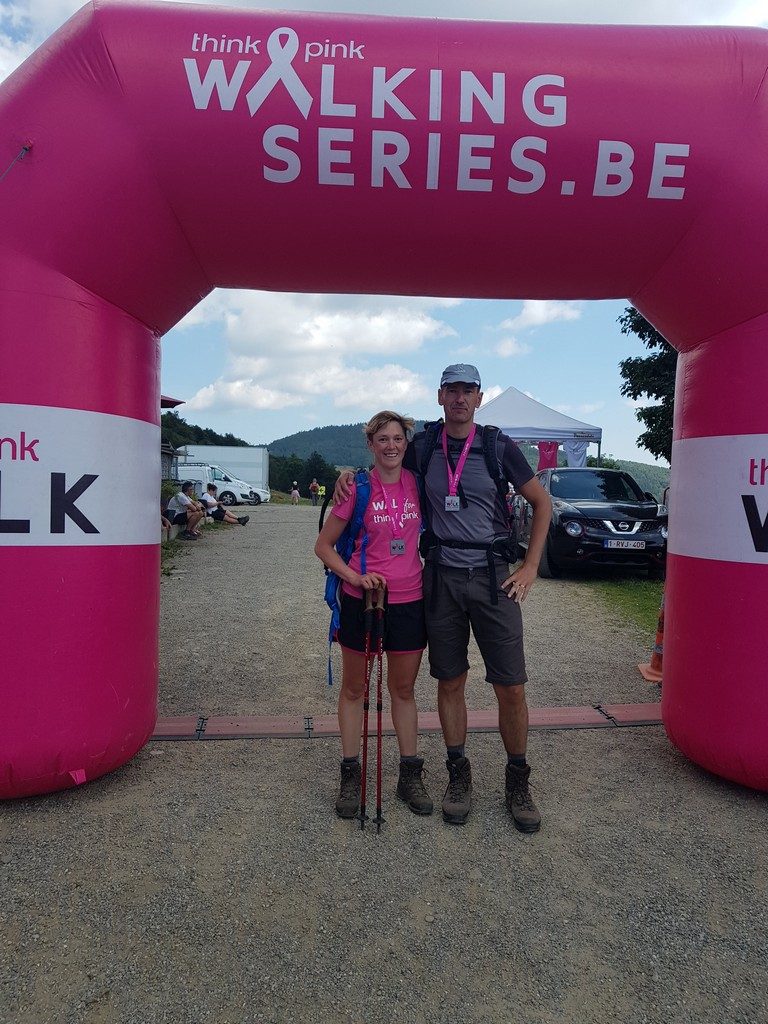 We stayed in a small bed and breakfast in Geishouse, called Gîte Les Lupins. We booked to stay in the main house, but when we arrived the host told we could stay in a separate house about 200 meters away. It was a vacation house for 11 people which was renovated in the inside, but not yet at the outside. It had everything we needed to sleep quietly after the walks. Breakfast was with bread, jam, fruit, cake, orange juice and milk. We had coffee facilities with a Senseo including plenty of pads. It was a very basic breakfast, but with such physical challenge, you don’t need any greasy stuff. The location was maybe not perfect, but price quality we were happy, it took us around 30 minutes to drive to the start in the morning.