Easily reachable as it’s in fact above the auto route. You can either take the pass before the tunnel, or go through the Arlberg Road Tunnel like we did. It’s is the same tunnel you need when going to Ischgl. You need to pay, but when you are through the tunnel, you take the exit and you are directly in the village. However, make sure you don’t miss the exit, as it’s only 200 meter after the exit of the tunnel. The tunnel is the longest of Austria is a little longer than 13 km.

When we were in Sankt Anton in 2015 we needed the ski bus to reach Lech. After this year they have build 4 or 5 new lifts to enclose the domains with lifts instead of ski buses. According to the statistics this is now the biggest enclosed area of Austria. They have created a “Run of Fame” which is 65 km and you can make the loop in 1 day and will have more than 18.000 altitude meters. I read it is quite intensive to make it in 1 day, so not for beginners.

It is important to know that the domain is not always fully connected. During our visit we could reach Zurs via the Flexenbahn, but we could not get to Lech as there was not yet enough snow to open the last slope. With a 5 minute bus ride you can bridge the gap. The return route was open, but according to us this is not a fun journey. Only the blue slope 180 was open which is close to be flat and with the heavy headwind we really had to work hard to get down.

Another disadvantage is that with the return from Zurs you have 3 lifts in a row (Trittkopfbahn – Flexenbahn – Valfagehrbahn) for about 20 to 30 minutes before you can ski again. We didn’t like this too much. Further you really have to take the closing times of the lift into account to make sure you get back on time.

There is just above 300 km of slopes

A lot of the apres ski fun is not in the real city center, but located just before the end of the slopes. It is your personal choice to do the last part on skis or not. Mostly we dropped our gear in our locker before taking a (free) bus to the apres ski bars. At the end of the apres ski we took a taxi back to our hotel or a restaurant. You pay around 15 euro for a taxi of 7 persons and according to us that is safer than skiing those last few hundred meters in the dark after drinking beers.

One of the most famous and probably best bars around. You have a bar outside and also inside you have a big party area. You can ski in, but we find it wiser to store the ski material and go by public transportation. You can take the free bus (number 3) at the terminal and the bus stop is about 250 meters away from the après ski bar; very convenient. Returning was via an 18 euro taxi ride. It was with a van, so if you are with a few friends, it’s still affordable.

About the Mooserwirt we can be short, it’s an awesome party place. The resident DJ plays the best songs and can really feel what the audience wants. Not only German Schlagers but a mix from everything. We had several great evenings during our visits.

Big bar with also a big area outside under a huge umbrella. When the weather is nice the umbrella is closed, and later on the evening, they close it with some kind of ceremonial music. It is not a real party place, so it is perfect to have drink when you want some more quiet apres ski or just to gather the friends before hitting any other bar.

A typical family run hotel with a very good service and free parking across the street. The rooms have everything you need for a ski holiday and in the morning there was a breakfast buffet with daily changing options. Not the most extensive one, but certainly enough to get you going. From the hotel it’s a 2 minute walk to the lifts and same time to reach the bus terminal. (Easy to get safely to the Mooserwirt)

A lovely older pension hosted by friendly owners. The hotel is located in a quiet area and close to everything. The rooms are nothing fancy but have everything you need if you look only to sleep and have a clean bathroom. The breakfast was generous and had everything we needed. As often we went during Marie-Claire her birthday and the hosts helped me our perfectly to organize a surprise with cake and drinks for our friends.

We stayed only 1 night in the place before switching to Haus Fallesin. Another couple of our group stayed the entire week. Nice rooms and a very nice breakfast. Update: When I contacted this place for a stay in 2019, I learnt they switched to apartments and no longer have double rooms.

During our visit there was a show performed by several ski instructors from local ski schools. It was a combination of light show, music, action and fire works. In the end there were even some snow bulls involved. When you are around and they have this show, I strongly recommend to attend it. 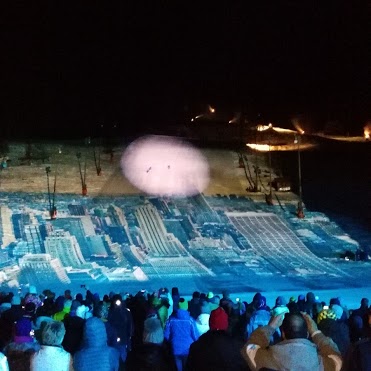 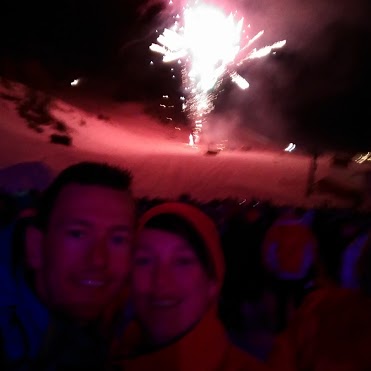 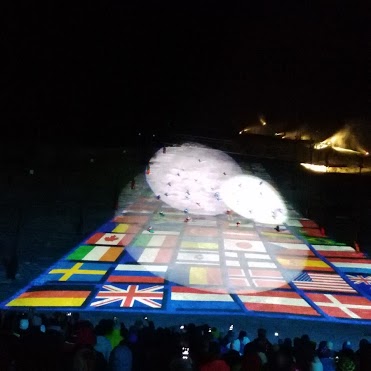