We were all set to attend the 2020 edition of the closing, but Corona got this edition cancelled a couple of weeks before the end of the season. Plans are made to go back for a later edition.

In 2016 we went to the famous closing event in Ischgl, known as the top op the mountain concert. It is a concert on an altitude of 2300 meter. Over the past years they hosted a wide range of famous artists from Tina Turner, Robbie Williams, Elton John, P!nk and many more. During our edition back in 2016 we saw a concert of Muse. As newbies we thought we could not bring drinks to the concert but when looking around all people had their own drinks with them. And the best thing is you don’t have to worry to keep them cold. Some people even make little bars with ski poles and snowboards. They bring snacks and have a great time awaiting the start of the concert. But even if you didn’t bring your own drinks, you can easily order them over there.

After the concert people go back down to the village and continue to party till late hours.

Make sure you go visit the Schatzi Bar as there is a big party in front of the bar and with good weather the the dancing girls are outside on stages. Nice atmosphere when we were there.

The squares at the Kuhstall and Trofana Alm are also very crowded but there are drink stalls where you can easily get drinks. 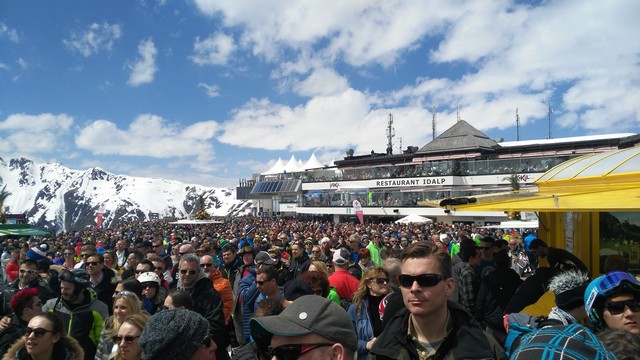