2009 – For Slovenia we planned a road trip with tent on camping’s. From Belgium we went in one direction towards the region of Bled.

The first day we spend on a camping in the neighborhood of the magnificent Lake of Bled. There we rented a boat and rowed ourselves to the Island. It is quite intensive to get there with the old boats with old-fashioned oars.

During our stay we learned there was the annual festival in Slovenia’s Bohinj Valley. That’s when hundreds of cows – adorned with flowers, wreaths, and ribbons – come down to the lowlands after staying the summer in the upper meadows. It was a great experience and there are locals selling all kinds of food and drinks. We spend around 2 hours.

The camping (name and link to be completed) was very clean and spacious. Although we red on the internet that it could get crowded during summer holiday. But in September we were almost alone on the camping. the sanitary block was very clean and the hot showers were appreciated. Around the area you have few places where you can do barbecue.

The Vintgar Gorge or Bled Gorge is a 1.6-kilometer gorge in northwestern Slovenia in the municipalities of Gorje and Bled, four kilometers northwest of Bled. Carved by the Rodovna River, in the continuation of the Rodovna Valley. This walk is really cool to do. Certainly because Tom is found of bridges and these kind of walks. It was not that crowded on the moment we where there. Make sure to check this place when you’re around. (TripAdvisor) 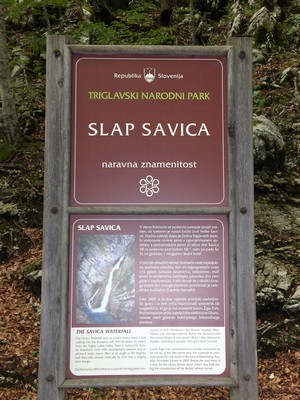 The third most visited attraction in Slovenia. A spectacular waterfall, hidden amidst the steep wall of the Komarca.

It takes about 20-25 minutes from the parking lot over stone steps. It is a moderate walk and along the path there are some resting points.

Once you reach the fall, there is a fence blocking you to go closer. There were a few people in front of us, so we had to wait a bit till they were done taking pictures. After we were in first line to have a good view and take our own pictures 🙂 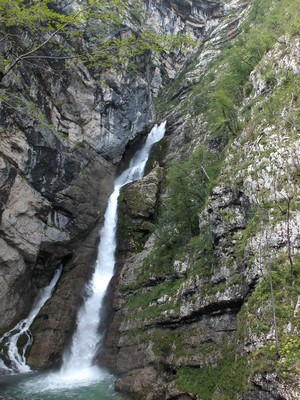 We visited the Ptujska Klet winery. It is the oldest winery in Slovenia – its cellars dating to 1239 lie labyrinthine beneath the strees of the city of Ptuj. We visited the cellars and had a wine tasting together with our friends. In the cellars we saw some very old bottles for sale. Our birth years were still available, but as you can guess, this was not cheap.

When we were in Bled we wanted to do canyoning and found an organisation that suited us. We were brought by a little van to the starting point of the tour from where we had to make a walk deeper into the Nature Park. The adventure was incredible!

We had to jump into water, swim a bit, do rappel from the steep rocks, do some gentle climbing. The tour was very well organised and we grew during the activity. We first jumped into water from about 2 meter of height. Later on we jumped from 7 meters and the final jump was one of 10 meters. That gives an insane feeling to jump from that high. If you ever have the chance to do Canyoning: don’t hesitate! It is still in the top 5 of craziest things I’ve ever done.

As this is was back in 2009, we did not have a waterproof camera, so we don’t have any imagery of this crazy adventure. There was a person in the group that did take some pictures, and although we swapped email addresses, we never received the pictures. So if the person who joined 4 Belgian people back in September 2009 for a Canyon adventure in Bled reads this, please get in touch with us 🙂