La Vélomédiane - The Belgian one

2012 to 2017 – We joined La Vélomédiane 6 years in a row. It is traditionally held on the last Saturday of August which makes you still have a goal end of summer, which makes you going during summer. Sometimes it’s tempting to stop biking when summer starts and focus more on barbecues than on biking 🙂

The race is 160 km with just above 3000 meter of elevation to gain and exists out of 3 loops. A first loop is 17 km followed by a second one of 40 km. Then you leave La Roche for a third time for the main loop of 100 km. It’s convenient for the supporters that riders pass in the morning a few time in the city center. They can support without moving to far.

The start used to be at the river but in 2017 the line up was in the pedestrian zone of the city. When you start the race you have your first climb of the day after approximately 400 meters. It is a gentle climb with an average of 5% and lasts for about 3 km. The biggest challenge is to hold your horses and stay calm as plenty of people rush it up the hill. When you are at the top, you have a straight part on the main road which also has a gentle incline. There are bigger groups and the speed is quite high. After 7 km you leave the main road to the left and have a decent. I recommend to be in the front of your group, as still, quite some people take some risks in this part of the race. Quickly after you have the Cote de Mierchamps of 1 km before you have a long decent of 8 to 9 km on narrow streets to finish the first small loop. 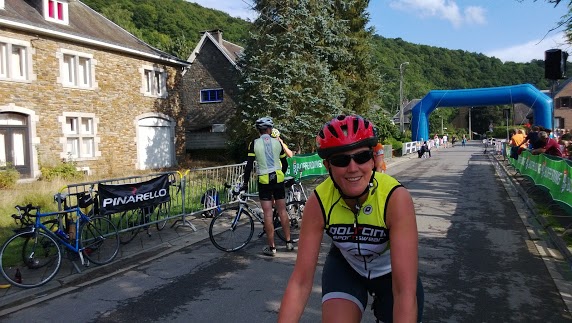 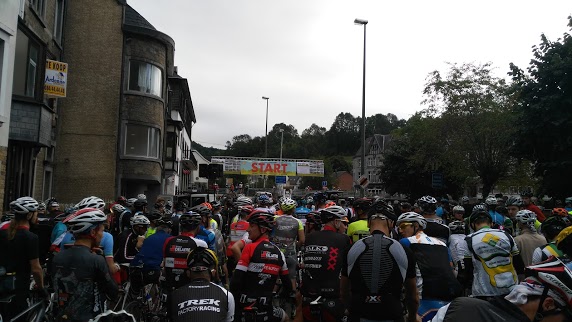 With a turn of 180 degrees you have to climb the Route de Hives which you will decent about 35 km later. In this loop you will climb the Barrage de Nisramont and the insane Route de Maboge. This last one is just above 2 km and the first part is close to 20%. There is a short decent after 1 km to then again go up to 10% and an ending part which is not that steep, but it feels hard due to the first part of the climb. Each year it’s a huge satisfaction when this climb is over. It’s a milestone in the race and shortly after you can start the decent back to La Roche to finish your second loop.

The third loop of 100 km takes you again outside of La Roche towards Aisne but for this you have to climb Col d’Haussire which is one of the heaviest in Belgium. It’s over 4 km and many parts are close to or just above 10%. Certainly the second endless part in the forest is not to be underestimated. When you reach the top you have a short decent with bad road and sharp turn. At the end you will join the climb of Samrée where you will come down to finish the race in about 90 km. But before you get there, you still need to go over Côte d’Odeigne, …

At approximatley 135 km you pass the hotel Le Château de Rendeux and you have to turn left where the heavy Côte de Beffe is waiting for you. As you were riding some kilometers on the main road, probably in a group and quite fast, the change to climbing in combination with the distance and steepness of the climb will most likely make you suffer. This climb stops in the village where you see a tank, but then it just keeps going on and on. The second part is called Côte de Dochamps and feels like it never ends. Often the wind is in the disadvantage. When you finally are on the top, you will turn to the right and then follows a long decent to the finish. Just a few turn in the center and then the last straight part to the finish.

We stayed here in 2015 till 2017. The hotel is a bit old-fashioned but you can’t beat it’s location to participate to this course. It has a big parking lot and it’s just above 1 km to the start line-up. The rooms have a bathroom and are not too big. You are not allowed to store your bike in the room. They do have a secured shared garage, but we are not too found of this, as still everyone with a bike can access the garage. Off course it’s better than nothing. The rooms do not have airco and when it’s still warm at the end of August, it might be quite warm in the room. They offer a fan, bat that is not bringing the result of an airco. It’s something to take into account. The breakfast is in buffet style and has everything you want. On the day of the race it’s served earlier to accommodate the race participants.

There in an outdoor swimming pool which is refreshing on hot days, but it might be crowded at sometimes. Next to the garden you also have the Ourthe river. Some years we went refreshing in there, as it was way more quiet.

in the bottom floor there is a very old-fashioned bar where sometime a DJ plays some music. It is a special atmosphere but they server good Belgian beers at a moderate price, so after the race this is much appreciated.

In 2013 and 2014 we stayed in this 4 star hotel which is located about 10 km from the start. The main road to the start goed gentle up and down, but you can also take a smaller track next to the river, which is flat. It’s good to warm up for the race, but off course, after the race you still have to ride another 10 kilometer. It’s a little less convenient than the hotel in La Roche itself. We biked back to the hotel immediate after the race to take a shower and went back by car to collect our certificate and have a well deserved drink. They serve Trappist Chimay.

There is a good restaurant on the ground floor where we ate on Saturday evening after the race. Very convenient when the hotel has a decent restaurant, so you don’t have to ride to the center.

In 2012 we stayed with a group of friends in one of these 2 vacation houses. The house is approximately 11 km from the start, so we took the car to get there. The house has everything you need and is mainly interesting when there are kids and non-riders as they can stay in the house during the day when the race is on-going.